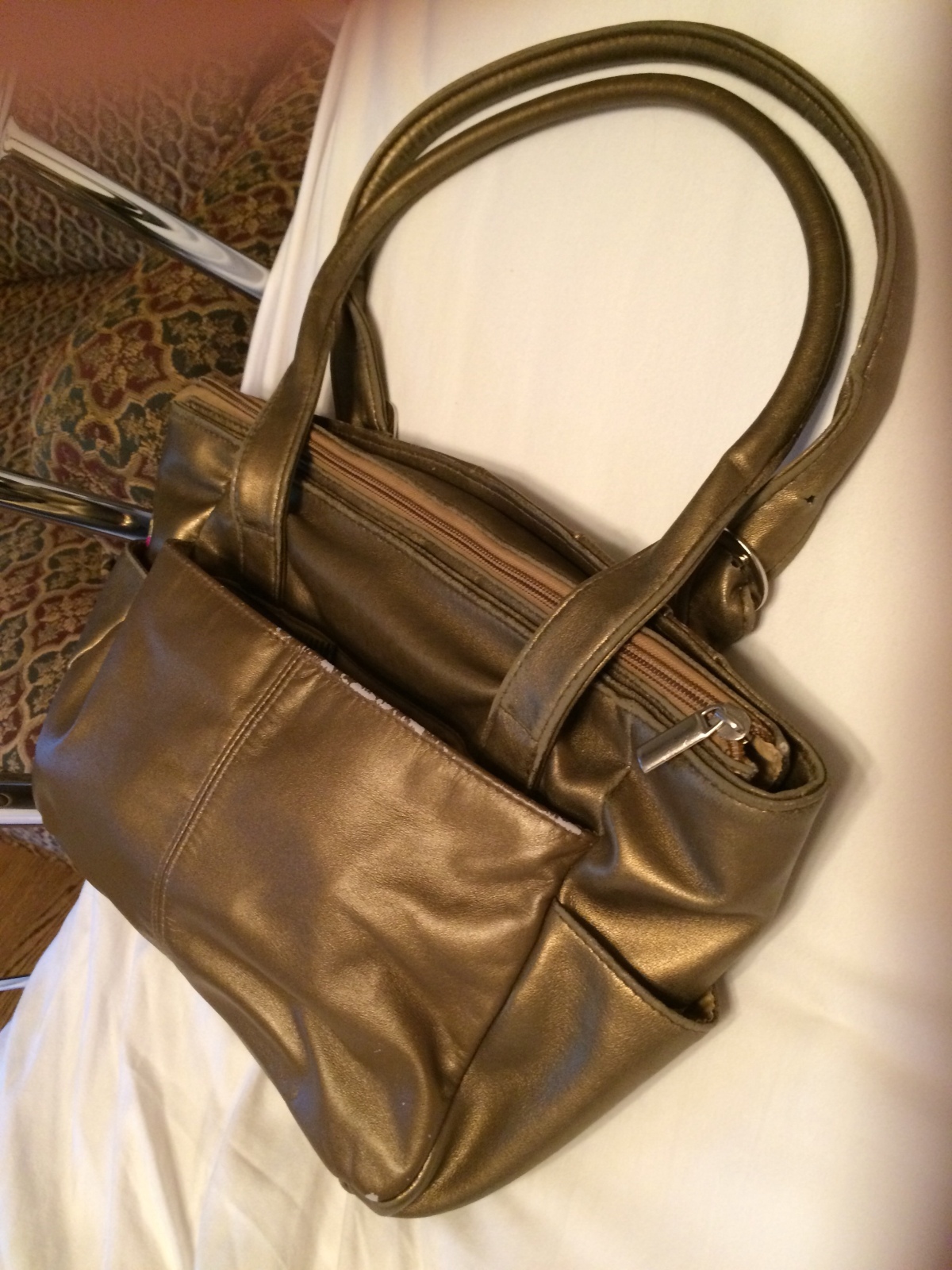 In the world of Alzheimer’s, a woman and her purse (and a man and his wallet) aren’t easily parted.

Mom carries her purse everywhere she goes and sleeps with it under her pillow or worn on her shoulder and hugged tightly to her side under her covers.

Rummaging and rifling through the contents of her purse is a favorite Sundowning activity (for more information on Sundowner’s Syndrome, click here). I keep a baby monitor next to my bed and can hear and see her zipping and unzipping her purse at all hours of the night – over and over again. I can see her happily stumbling over the same piece of mail and delighting in reading it out loud as if for the first time.

The contents of her purse may vary a little bit, but I can count on a few things. She’ll probably have five or six combs, her glasses in a familiar blue case, a few colored pencils absconded from her coloring set, her favorite pieces of mail, three or four tubes of lipstick, and Kleenex…wads and wads of Kleenex. And, for good measure, there may even be a roll of toilet paper crammed in there. It’s a harmless security thing. Her purse filled with familiar objects brings her a little peace and reduces anxiety.

Some church and community service groups even provide “rummage bags” or “rummage boxes” for memory challenged residents of local nursing homes, as the act of rummaging through the contents of the bag provides a sense of calmness and occupies them for hours (see related article filled with ideas here).

The paranoia associated with Alzheimer’s causes her to believe with all sincerity that people will try to steal her stuff. So precious is her purse, Mom will hide it to keep its contents safe. Now that she lives with me, I know where her favorite hiding places are located. When she still lived in her apartment or in her own home, sometimes she hid the purse really well.

Really, REALLY well. For times like that, we found a handy little device called a Tile which helped us locate her purse using an app on our phone. We give it our highest endorsement and heartily recommend it for anyone dealing with an elderly parent…or someone like me who misplaces her car keys more often than she cares to admit.

Sometimes my mom is hilarious. This was one of those days. Not long ago, I posted this on Facebook. I hope it brings you a smile too.

Mom is one of many afflicted with Alzheimer’s who adamantly refuse to shower or bathe. We deal with that problem okay by facilitating a “sponge bath” whenever she changes her clothes. Up until recent months, we handled hair washing by taking her to the beauty salon every other week or so. Sadly, her mobility is slipping away almost as quickly as her memory, resulting in her not getting out of the house much anymore.

We now wash her hair at home. Hair washing is sometimes planned into our day. Other days – like today – it’s impromptu. END_OF_DOCUMENT_TOKEN_TO_BE_REPLACED

One of the things we have discovered along the way as we have cared for my mother in our home is that she seems to enjoy taking care of little animals for vacationing families. Her most frequent guest is a sweet little guinea pig named ‘Mr. Nibble.’ Whenever he visits, Mom has purpose … and something to over-feed for a few days.

So, when a “free” parakeet became available, I jumped at the chance to add a little pet therapy to our home caregiving. My daughter and her family kindly offered to go pick up the bird from the paint store where he was temporarily residing. Momma watched with curiosity as my daughter carried the towel-covered cage through the kitchen and placed it upon an old toy chest. Once she figured out what it was, rather than be delighted, Momma chaffed at the sight of the bird in the cage. She wanted nothing to do with Philip. We had so hoped she’d warm up to this handsome little guy.

My granddaughter Violet (age 14) aspires to be a writer so, when she came for a visit the next day, I asked her to be a guest writer on my blog and tell about our experience with the bird. Here’s the story from her perspective:

When Philip finally took flight, grandma and I were in mid-conversation. Philip zoomed around the kitchen, around the lights, over grandma’s head, into the living room and down on his cage again.

Great-grandma’s eyes were wide with fright. Philip took off again and great-grandma put her foot down. “Alright! Now if someone doesn’t put that bird away, it goes!” Papa laughed trying to lighten up the mood.

“NO! I’m not joking! Put that bird away or it goes!” Great-grandma said, pointing a shaking finger at the bird.

“This is my house and the bird stays,” Papa said calmly, but loudly (so she could hear).

About an hour later, great-grandma was sitting next to the cage saying things like:

“Whats you lookin’ for?”

Then, while gently stroking the cage, I heard great-grandma say, “Pretty bird, pretty bird. I can’t whistle as good as you!”

Cute little story. Every bit of it true.

I wish I could say that Momma and the bird became good friends, but that part of the story would definitely be fiction. Truth is, even though her hearing is marginal, she could hear the bird’s high-pitched squeaks and squawks and the noise agitated her. To make matters worse, his daily exercise flights out of the cage frightened and irritated her something fierce.

Mom even threatened the poor little bird’s life and well-being on a number of occasions – so uncharacteristic of her before Alzheimer’s.

If life had do-overs, I’d ask for a trial visit to see how my mom would react before committing to pet ownership. Thankfully, we were able to quickly find a new family for the bird. Philip now has a happier outlook on life: a new home, a family with a little girl that adores him, and a new feathered friend and companion – another parakeet named Zeuss.

A summer thunderstorm knocked off the petals of most of the lovely peony blooms last night. Thankfully, a few tightly closed buds hold promise of beauty yet to unfurl in this summer’s peony finale. As the peonies fade in their glory and prepare for curtain call and their final bow, the daylilies in their own splendidly colorful petaled costumes stand in the wings ready to take center stage and continue the summer’s floral show.

I’m excited for that show too, but I so wish the peony extravaganza would last a little longer! It’s so hard to say goodbye to the peonies each year.  END_OF_DOCUMENT_TOKEN_TO_BE_REPLACED 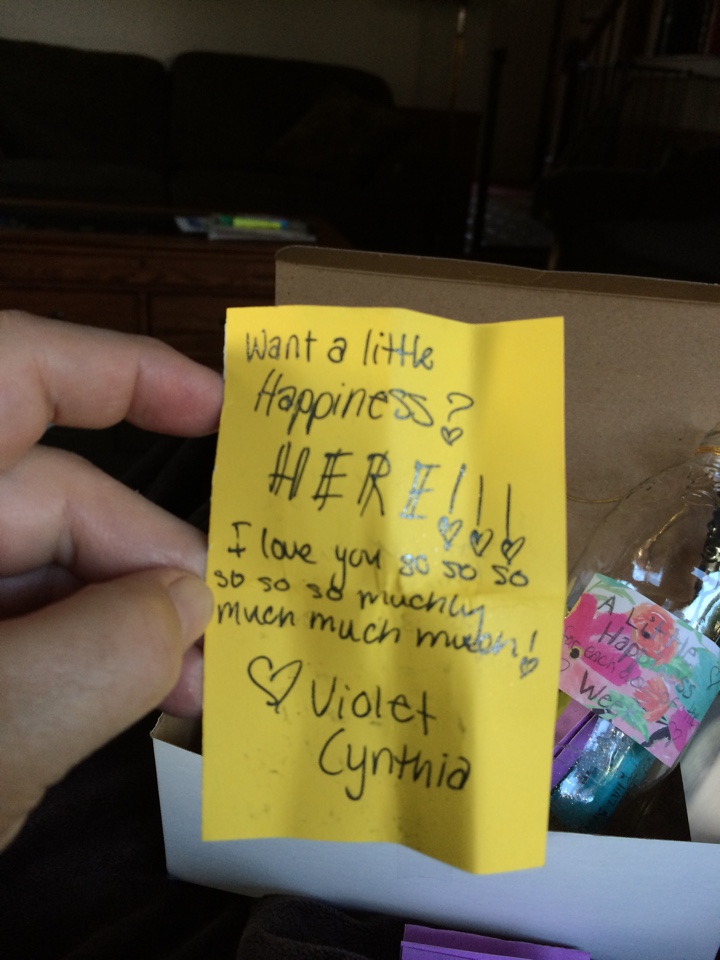 Encouragement comes in many ways in our lives. When your world feels a bit small while caring for a loved one with Alzheimer’s, having just a little dose of happiness in the form of an unexpected and very personal gift goes a long way. When the encouraging gift comes from a grandchild, well, that’s incredibly special. 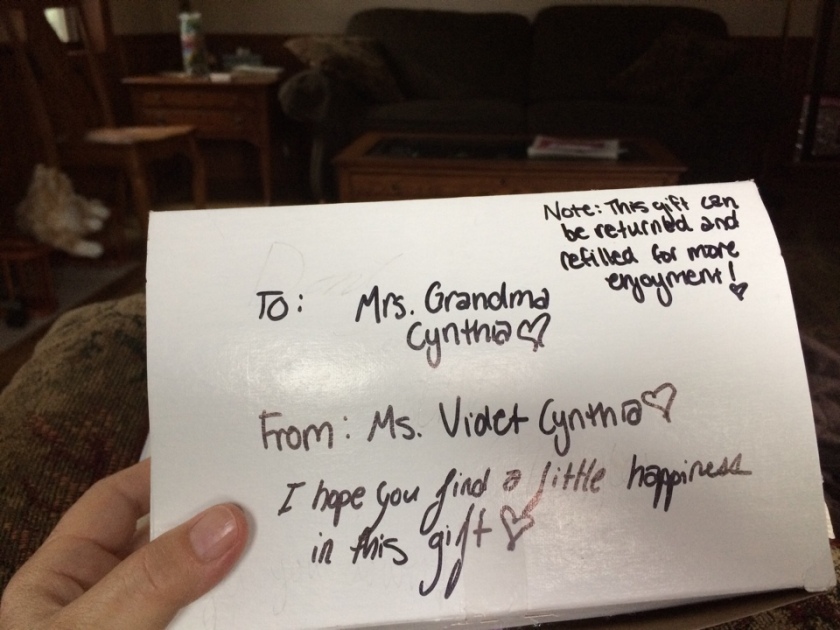 My (not-so-little anymore) namesake granddaughter, Violet Cynthia, presented me with that type of gift yesterday at church. She said, “It’s not a Mother’s Day gift, because you’re not my mother. It’s just something special for you.” END_OF_DOCUMENT_TOKEN_TO_BE_REPLACED

Spring keeps teasing us here in Wisconsin, drawing us out of our houses for walks in the sunshine or a little time in the garden, and has us washing the salt off of our cars and sweeping out the garage. Then, BAM! Winter is back!

Momma’s eyes light up when Kathryn shows up each Friday evening. As Kathryn hoists her burgeoning backpack off of her shoulders and settles in at the kitchen table next to my mother, I look over my shoulder as my husband and I leave for our weekly Friday evening of respite and sense that I will not be missed at all. These two friends have already started in on their fun. 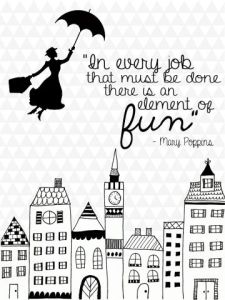 I’m pretty sure that our mom’s caregiver Kathryn is a real-life Mary Poppins. Much like Mary’s carpet bag filled with surprises, that backpack of Kathryn’s is always stuffed with hand-selected items which will help my mother “find the element of fun” for the next five and one-half hours. Together they  eat supper, then work puzzles, color in their coloring books, have fun with hidden picture books, make a craft together, and a host of other things. Kathryn will read a storybook with mom, bring her a book filled with beautiful butterflies and flowers to page through, or even read a Bible passage together.

I’m so very grateful that early on in our caregiving journey with mom we decided it would be money well spent to hire a caregiver to help us out on a regular basis (actually, my very wise husband insisted). Mom is by no means wealthy, but Social Security and a modest pension gave her the resources to pay for a little help, so we chose to have someone come in twice a week for a few hours. When she was still living in her own home in Milwaukee (82 miles away from me), we chose Rent A Daughter to help us fill the caregiving gaps when family couldn’t be there to check in on her. Once we moved her to Fitchburg, we chose Home Instead to be our caregiving ally. 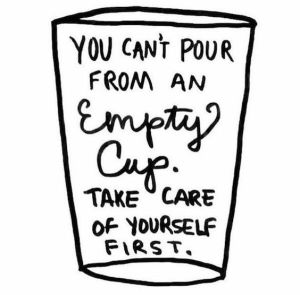 Some might argue that it is too expensive to hire someone. From my way of thinking, a few hundred dollars a month is less expensive than having my own health suffer because I never get a break. Preventative medicine, if you will. And it’s definitely less expensive than the cost of assisted living or a nursing home.

Whenever I have the opportunity to encourage someone who is heavily invested in caring for a loved one, I always encourage them to find a trusted substitute caregiver. Even if finances to pay for outside help aren’t an option, I encourage caregivers to reach out to friends (a retired senior), family (for us, our daughter, eldest granddaughter, or sister), a good neighbor…anyone who can give a little break from the physical, mental and emotional rigors of daily caregiving. It might not be for five hours, but even an hour or two away can make a difference.

Another sweet caregiver named Kathi comes on Sunday mornings, allowing us to have six hours to be able to teach our respective Sunday School classes, attend our worship service (my brother comes too), and enjoy lunch together with my brother. Mom doesn’t usually feel much like being social in the morning hours, but spunky Kathi’s positive can-do spirit also manages to keep my mother content and socially engaged during our time away. When we return, we usually find them seated at the kitchen table watching the birds at the birdfeeders and coloring together. And as an added bonus, Kathi always makes sure my dishes are done! Gotta love that!

The blessing of finding TWO caregivers who bond so well with my mother is most definitely Supercalifragilisticexpialidocious!