I’ve mentioned my brother a few times on my blog now, so thought I should reach back in time to almost a year ago where I introduce him on Facebook. I’m Brad’s health care power of attorney but, more importantly, his sister. So, I got involved in my brother’s business when it became very apparent to me that there was more than laziness keeping my brother living as a recluse in my mom’s spare bedroom. No work for 6 years (he’ll admit being lazy at first about finding work after losing a good job). No income and no ability to handle his own financial affairs. Diabetic, but doing nothing about it. No time spent with friends. Just sleeping, eating, smoking cigarettes in the garage, and watching TV.

One day in April of 2015 I announced to Brad that I was taking him to the VA to see if we could get him some help for some very obvious (to me) health problems. He was so sick and very willing to go. That began a year of uncovering and treating several significant health problems – including cancer – multiple cancers, one of which had already traveled to lymphnodes.

With the help of some pretty amazing doctors at the VA Hospital, Brad fought his cancers and won. But the fight was hard on his already frail body. It soon became clear he could not go “home” again. Brad has since settled in nicely in a skilled nursing facility near my home. Visits with the doctors at the Madison VA are not quite as frequent. We continue to routinely screen for skin cancer, treating when necessary.  Because Brad is not a good candidate for another round of chemo and radiation, we are no longer actively screening for the return of colorectal cancer via invasive tests and medical imaging. We’re doing what’s referred to as “watchful waiting” – waiting for symptoms of cancer to return and planning to provide comfort care should his cancer return.

Meet my younger brother, Brad. I would describe him as a generally laid back, genuinely nice guy. Single. Never married. Former trucker. His happy place in life is sitting around a campfire with a few good friends after a day of hunting or fishing. It has been a few years since he has felt well enough to be in his “happy place,” or anywhere besides his bed.

Lately I’ve been accompanying my brother to the VA hospital once or twice a week, sometimes spending an entire day there, depending on how many doctors he needs to see. My heart is filled with compassion for my brother. It has truly been a rough year for Brad. So many ailments and serious health concerns previously identified by the Milwaukee VA (Zablocki) have been addressed. Now, as we transition his care over to the Madison VA, Brad’s new care teams have been getting to know him – one clinic at a time: Retina Clinic, Geriatric Clinic, Dermatology, Oncology, Urology, Podiatry, and Neurology. Brad and I are very grateful for the fine care he continues to receive as a military veteran.

Today’s appointment was with his new neurologist; a straight-shooter who does not mince words. Nothing was sugar coated. Sometimes I would steal a glance at Brad to see how he was taking the brutally honest information. There was very little in the way of encouraging news today. I had mixed feelings; part of me wanted to cry, the other wanted to hug this doctor for his forthrightness and practical advice.

Brad has battled cancer courageously and without complaint. In this regard, except for some skin cancer yet to be excised, he is doing well. The sad news is that he will never regain the use of his legs. Diabetes and chemo and radiation therapy have taken their toll. No amount of physical therapy will help him regain the lost muscle mass. The wheelchair is, and will continue to be, his everyday companion.

It pains me to see my younger brother living in a nursing home. I want him to live with me and I want to help take care of him, but my house will not accommodate his mobility needs. Due to mom’s physical problems and her declining mental acuity, living with mom is not an option either. Thus, Oregon Manor is his new home.

Mom misses Brad too. Each and every day she hopes he is coming home to live with her. The mom in her wants to take care of her boy. Today, after Brad’s appointment, I brought him to Mom’s apartment for a little visit. Wayne prepared dinner and we sat down to eat together as a family. This meal together brought mom joy and gave Brad a different sort of dining experience than he has in the nursing home. Time with family. Precious.

After dinner and a brief visit, it was time to get Brad back to his abode. Together, we’re getting the hang of this transportation thing. I’m even learning to wrestle his wheelchair in and out of the trunk…not with the greatest finesse, but it’s getting easier. 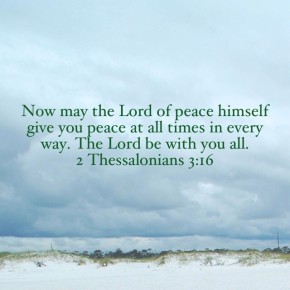 Our ride “home” was quiet. There was a lot for both of us to absorb following today’s visit. With Brad situated comfortably in his room, I left to go spend a little more time with mom. Once in the car, however, the enormity of the doctor’s words today registered in my heart and hot tears began to flow. It was another one of those moments in life where I knew I needed to pray, but the words would not come. But God knew what was on my heart and He heard my unspoken prayer.

The Comforter is here and He gives peace.

We're getting off the interstate and looking for life, love,and laughter on the back roads.

Your best garden tools and tutorials.

by prayer and supplication with thanksgiving let your requests be made known unto God. Philippians 4:6 ASV