When I married my husband, my last name became Winquist. As I have melded into that name over the years, I have learned that there are certain things that go along with that name. New culinary tastes are part of the territory. I’ve learned, for instance, that homemade pies are very important. Especially rhubarb pie. Mashed potatoes are definitely made from scratch…and gravy too (still haven’t caught on to that part). 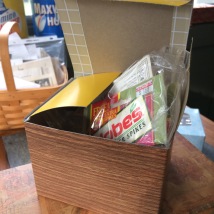 As a newbie Winquist, I learned frugality was a high priority. Empty jars and worn-out t-shirts get a second life, leftover ketchup packets are saved for future home use, and fruit and veggie scraps become wonderful compost for the gardens. My dear mother-in-law was the ‘Queen of Repurposing’ long before repurposing was even a thing. Bread bags and plastic butter tubs were rarely thrown away. Boxes took on a new life when they were covered with contact paper to make classier looking storage containers.  She even made her own rubber bands from her old support stockings (some of which are still in use in this house today).

Yes, frugality is a way of life for us.

When my daughter was in first grade, her teacher shared a concern with us at parent-teacher conference. Apparently, our family’s frugality was getting in the way of Beth enjoying first grade to its fullest. The Winquist-by-birth in our family had vetoed the Winquist-by-marriage during the requisite annual school supply shopping expedition by deciding that our daughter’s gently used crayons from kindergarten still had enough life in them for first grade. But, apparently, our Beth couldn’t help but notice that ALL of the other kids in the class had brand new crayons. It apparently sucked the joy right out of coloring for her.

At Mrs. Warner’s suggestion, Wayne lovingly laid aside his frugality and bought our Beth a new box of crayons. You would have thought he bought her the rarest treasure on earth. By laying aside the frugality and the putting on of generosity, the joy of coloring was back! In fact, since we had delayed our purchase, she now proudly owned the newest crayons in the class!

This memory from our daughter’s childhood came to mind the other day when my still frugal husband exercised loving generosity by purchasing a fancy-schmancy set of Thornton’s colored pencils for my mother – complete with a carrying case. It was neat to witness the same joy in Mom’s eyes that I had seen in my daughter’s eyes years before. Momma’s world, lived in the throes of Alzheimer’s, was suddenly brighter and filled with more color and joy.

by prayer and supplication with thanksgiving let your requests be made known unto God. Philippians 4:6 ASV

Home is Where the Boat Is

A daughters journey with her mom having alzheimers and dementia.

A blog about life in Wellington, New Zealand