My dear readers, I think it’s about time to meet up for another cup of coffee and a chat. I thought we could talk about a question I am often asked.

What signs did you see that made you suspect that your mom was experiencing memory loss?

One place to start when gathering information about Alzheimer’s is the aptly named Alzheimer’s Association. You can click here for their Top 10 list of signs, but here’s my list of signs we noticed along the way:

Our solution to the hidden keys problem was to attach a “tile” which would allow us to use an app on our phones to find them. (Click here for info)

Most of these changes were subtle, but they began to add up. Somewhere in the middle of all of these changes, I knew in my heart it was time for me to make sure I invited myself to my mother’s next doctor’s appointment. I knew that he and I were going to have to become allies in my mom’s future care, so I stopped by her physician’s office and dropped off a copy of my power of attorney for healthcare paperwork so that they could be scanned into her record. I also wrote a letter to her primary care physician outlining my concerns. Now we could begin the process of me being in the loop related to care discussions and decisions. It was a hard step, but a necessary one.

Well, it looks like my cup of coffee is on empty and I did all the talking. Sorry about that. If I may ask, if someone you love has Alzheimer’s, what were some of the signs YOU noticed in your loved one?

Math has never been my strong suit. My earliest memory of my aversion to mathematics goes back to grade school. Details are fuzzy, but flash cards and standing with chalk in hand at a blackboard with snickering classmates behind me were involved in the torture. No amount of remedial help or after supper tutoring from my dad could erase the ill feeling of dread and fear whenever our teacher would stand in front of the class with a stack of paper and ask us to put our books away and take a pencil out of our desks. I can still picture her walking up and down each row of evenly spaced desks, placing a sheet of paper face-down on our desks, instructing us not to turn it over until she gave us permission. The only thing pleasant about the dreaded math quiz experience was the strangely pleasing pungent aroma of the alcohol (spirits) on the fresh, purple-inked quiz paper freshly printed on a “spirit-processed” Ditto machine (now I’m really dating myself).

I dreaded getting my paper back after my teacher graded it too. That purple ink on the page would more often than not be accompanied by numerous red check-marks next to each wrong answer. Oftentimes, right next to the grade at the top of the paper, there would be a little note from the teacher that said “See Me” or something like that. It was embarrassing to never quite “get it” when everyone else around me (so it seemed) was catching on just fine.

In marriage, opposites often attract. My husband enjoys math. It’s probably not an exaggeration of facts to say that

playing with numbers brings him great satisfaction. On a related note, he truly enjoys spreadsheets. Creating them. Updating them. Analyzing them. Sharing them. He’s the type of guy that looks at pieces of information and says with a smile, “Hey, let’s build a spreadsheet for that!”

While I struggle with remembering which credit card to use in each purchasing situation, drag my feet at keeping spreadsheets updated, struggle with understanding investment principles, and chafe at always being asked for receipts for updating those spreadsheets, I can be thankful my husband is strong in those areas. His love of managing details means we can pull up a piece of needed information with a moment’s notice when caring for my mom and brother. It means he is a natural choice to be their financial power of attorney (a job I very willingly relinquish). It means our own budget is always balanced. Our retirement investments always well-tended and growing. Our bank account never lacking. Our vehicle and home maintenance always scheduled at appropriate times. Our emergency fund always available. Our taxes always done on time and without error. Our giving always done wisely and with generosity. 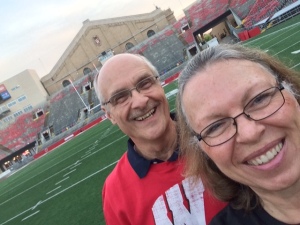 For this man, I give thanks to God.

Before I Forget: Sharing my love for God, family, gardens and my sweet Momma

Philosophy is all about being curious, asking basic questions. And it can be fun!

learning, growing, and learning more -- life on the Olympic Peninsula